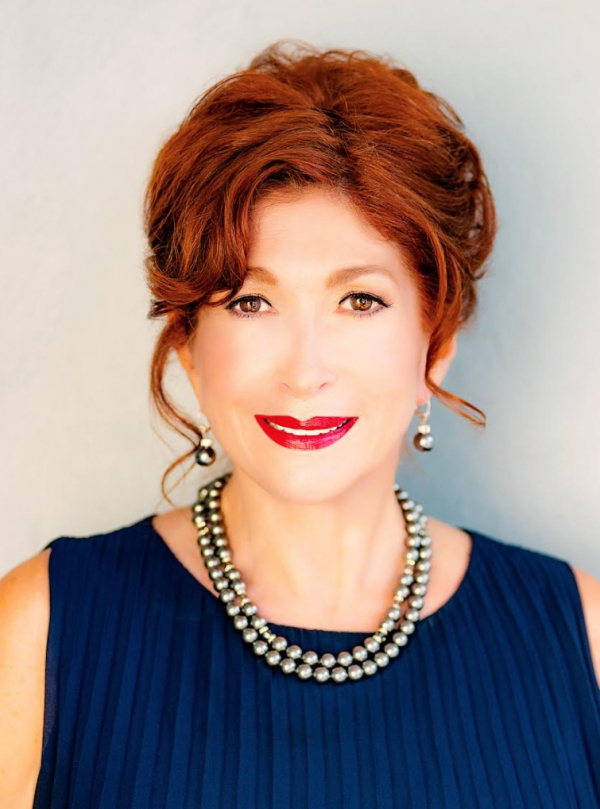 Annette’s story is one of family values and support – of an ongoing commitment to professionalism and recognition of the importance of standards. She has spent her entire career upholding the accountability of government to consumer safety and remains a relentless figure in the world of legislation on behalf of the aesthetic industry.

While down-to-earth, she has a sophisticated intelligence and possesses a high standard of conduct, honesty, and integrity in her work and life. With a tireless determination to enlighten her students, Annette developed Atelier Esthétique Institute to provide the best in skin care education. After almost 25 years in the aesthetic industry, Annette stays true to her mission that she established from day one: “Excellence in Education, One Student at a Time.”

Annette lies on the treatment table waiting for the flashes of beaming light to permanently zap away a few fine hairs on her brow. It is the first day of Atelier Esthétique’s 75-Hour Certificate Course in Laser Hair Removal and Skin Rejuvenation, and in Annette’s signature style, it is strictly hands-on.

She volunteers not out of aspirations of cosmetic improvement, but rather out of a heartfelt desire to give her students an authentic perspective of the coursework. Her philosophy is that the difference between a good aesthetician and a great aesthetician is attitude, education, and application. Annette emphasizes that her students take pride in themselves, their studies, and their work. She has an innate understanding of how to make them strive and achieve their best.

For more than two decades, Annette has been mentoring and educating aspiring aestheticians at her licensing aesthetic school and post-graduate facility in New York City. As President and Founder of Atelier Esthétique Institute, Annette has focused on the highest educational and professional standards. Annette explains that “to run a school, you must be an administrator and an aesthetician; you must be a psychologist and a disciplinarian.” It is this impassioned mentality that sets Annette apart from other educators in the industry.

A current Atelier Esthétique student, Kim Schanzer, admits that although Annette is strict, her goal is “to provide the skills, both hands-on and business-related, enabling her students to successfully practice their profession as aestheticians within the industry on all levels.”

Annette personifies Manhattan: fast-paced, poised, and elegant. Her need to continually strive for excellence stems from her childhood. Raised in Calgary, Alberta, Canada, she honed her retail skills at age six when she sold penny candy at her parents’ drugstore. Annette is the eldest of three girls. She credits her parents — Dad was a pharmacist and Mom ran the cosmetics counter — for teaching her the value of hard work and the drive of an entrepreneurial spirit. Her father passed before Annette was 30, but she still carries with her the pearls of wisdom he left behind. “My father always taught me to be kind and generous in spirit, and that I could achieve any goal through hard work and determination.” Even though he was already a well-respected pharmacist, he never ceased to update his knowledge of current drugs and treatments. Annette has inherited his passion for learning.

Crediting much of her success to her strong family ties, Annette notes that her sisters, Candice and Dorothy, showed unwavering support growing up and throughout their adulthood. She stresses that it is the newest generation of the Hanson family that provides her with a lasting sense of unconditional love and encouragement. Davita and Benny, Annette’s adorable niece and nephew, offer a fresh perspective and encourage her to pursue her passions in work and life equally. “They are the loves of my life, and have shown me that it is the little moments of happiness that measure your success,” explains Annette.

Upon graduating with a Bachelor of Arts degree in French from the University of British Columbia in Vancouver, Annette traveled alone to Paris to immerse herself in the language and lifestyle of the French. She returned to Paris several years later never dreaming she would discover her true passion — skin care. “I fell in love with Paris,” Annette reminisces. After months of searching, Annette decided to pursue aesthetics at the renowned Carita Institute of Beauty and enrolled in their one-year aesthetic program entirely in French.

Annette’s life changed dramatically when the President of Lancôme came to the school and asked the Director if he could interview only the best aestheticians. Annette was chosen to open the first Lancôme Institute in the U.S. and she was quickly relocated to New York City. Later she went back to Paris to study at the prestigious Dr. Payot Institute in order to return to the U.S. to manage their salons in Boston and New York. Annette continued her education by studying internationally at the Nemectron Equipment Institute in Germany, the BCM Institute of Thalassotherapy in Brittany, France, and finally with the eminent aromatherapists Micheline Arcier and Eve Taylor in London, England. Annette gained immeasurable business experience when she opened the first-ever Estée Lauder counter at Macy’s Department Store in New York City. As the manager, she transformed it into the nation’s highest grossing sales counter in only three months. She also credits Jack Finger, owner of the former Dynex Corporation, for the experience and confidence she gained as their Training Director for five years.

With the encouragement of her family, Annette applied everything she had learned to make one of her biggest dreams come true: she opened an educational facility in the Empire State Building. The impetus behind creating Atelier Esthétique Institute of Esthetics was to advance, educate, and improve the standards of the aesthetic industry, and with that goal the school continues today.

As a continual supporter of stricter regulation, one of Annette’s proudest contributions to the aesthetic industry was working with the New York Department of State in July 1994 to create a separate license for aestheticians, apart from cosmetology. She wrote New York State’s 600-hour aesthetic licensing curriculum and helped develop its written and practical examinations.

Annette is not “afraid to fight for anything she believes in, and this drive always leaves her triumphant,” declares Linda Lavelle, Annette’s long time friend and colleague.

Annette was active for over 10 years in the New York State Cosmetology Association, the California Barbering Cosmetology Legislative Alliance, as well as sitting as the Legislative Chair for the Esthetic Manufacturers and Distribution Alliance (EMDA) for four consecutive years. Her dedication to the field of aesthetics, as an educator and businesswoman, prompted her to be a founding member of the National Coalition of Estheticians, Manufacturers/Distributors & Associations (NCEA) whose goal is to define and convey standards of practice, while educating the industry and the public.

Susanne Warfield, the publisher of PCI Journal and a fellow Canadian says, “Energetic, unique, and a born leader, Annette demonstrates to all that if one works hard and stays true to yourself, you can and will be successful.”

Many aestheticians got to know Annette through her countless appearances as a conference presenter and panelist at professional conferences worldwide where she lectured to packed audiences on marketing, waxing, the threat of deregulation, and more. As a renowned skincare expert, Annette is a regularly featured author in industry periodicals such as DERMASCOPE, Skin Inc., American Spa, and Les Nouvelles Esthetiques magazines; she appears as an aesthetics expert on television and is quoted in leading health and beauty publications.

With her firm understanding of the power and influence of state laws and regulations, Annette has spent her entire career upholding the accountability of government to consumer safety and remains a relentless figure in the world of legislation on behalf of the aesthetic industry. She demands that people “do not just sit back and complain after the fact, but rather serve on the committees, attend industry meetings, voice their opinions, get involved, and make a positive difference!” She always says, “The professional life you save may be your own.”

Annette spent over 17 years as a national educator and distributor for Sothys, Phytomer, and M.D. Formulations, in which she lectured on ground-breaking skincare procedures such as aromatherapy, thalassotherpy, hydrotherapy, and the benefits of innovative ingredients such as antioxidants, retinol, salicylic, and glycolic acids. She was a consultant for world-renowned spas including Avon Spa Trump Tower, New York City; Turnberry Isle Resort and Spa, Miami, Fla.; Origins Feel Good Spa, New York City, N.Y.; and Helena Rubenstein, New York City, N.Y.

In 1999, Annette became a U.S. Citizen to serve in public office as the “Educator” to the Secretary of State in Albany, N.Y. on all matters of hair, nails, and skin on the New York Appearance Enhancement Advisory Committee – a position she proudly continues to hold.

Two of Annette’s most important contributions to the aesthetic industry are her efforts towards standardizing educational requirements and pioneering certification in many areas including post-graduate studies. Atelier Esthétique Institute became the first aesthetic school in the U.S. to be accredited by the International Therapy Examination Council (ITEC) in London, which issues the highest diploma in aesthetic throughout the world today. This means that on top of providing its students with the finest basic and advanced education, Atelier Esthétique offers its graduates international certification to practice their specialties around the world without taking another exam.

In March 2001, Annette was able to realize her dream of creating her own product lines. After licensing the GHK copper peptide for the spa industry, Annette formulated Simple Solutions® anti-aging skincare line for the face, while concurrently developing AquaSante® Marine line for the body. Having a thriving small business of her own product lines, Annette had finally accomplished a life-long goal, but found she had very little time to dedicate to her school. So in 2004, Annette decided to sell both product lines after three years of U.S. distribution to a bio-medical company. Although the decision to sell her creations was a difficult and emotional one, Annette knew that she would be able to focus on Atelier Esthétique Institute’s future and share more of her knowledge and experiences with her students. “It is her drive and relentless perseverance that is incomparable to any other,” says JoAnn Juralewicz, former Atelier Esthétique client and current spa owner. She claims Annette’s ability to “pick herself up, dust herself off, and move on helps her overcome anything.”

With such impressive contributions to the aesthetic industry as an aesthetician, salon manager, body therapist, spa consultant, advocate, writer, educator, and speaker; it is presumed that these accomplishments are the things that Annette will be remembered for. However, it is her character that lingers with everyone she meets. Not only does Annette have an impressive career, she has the personality to match. She is gregarious, humorous, and fun-loving. With an infectious laugh that draws people to her like a magnet, she thoroughly enjoys life and friends say that she has never lost her child-like excitement for simple pleasures. Her colleagues find her determined, charming, and hugely talented. When describing Annette, her peers agree that they have never met anyone so energetic, enthusiastic, strong, and so endlessly curious.

Joel Gerson, publisher of the Standard Textbook for Estheticians says, “I have had the opportunity to work with many aestheticians, teachers, school directors, and owners, and I can honestly say that Annette Hanson is one of the best our industry has to offer.”

As Annette reflects upon the incredible milestone of Atelier Esthétique’s 25th anniversary in 2010, she looks forward to what the future may hold for her.

As for now, in between lessons on skin cleansing, makeup application, and customer relations, she is the master teacher that tells us all to breathe more deeply, laugh more freely, love life more fully, and enjoy every moment on the path to your own personal destiny.

Learn more about Annette Hanson at this link.